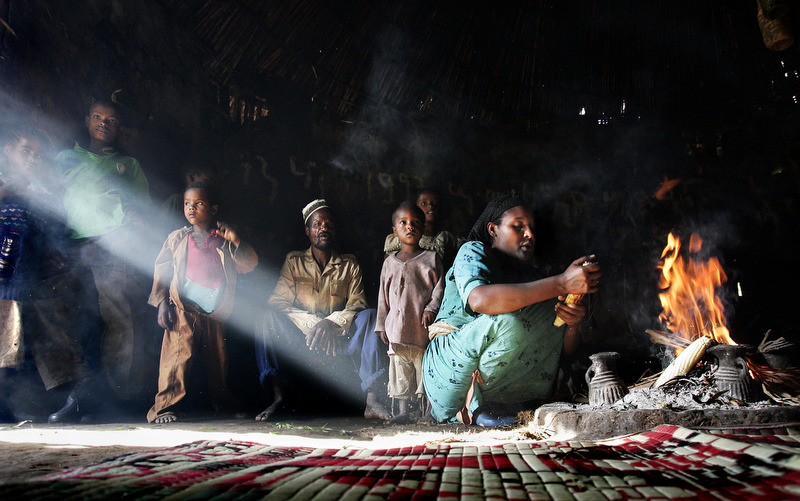 Fatima cooks corn over the fire while her husband Aman and their children sit in their tukul near Project Mercy in Yetebon, Ethiopia. Fatima and Aman's son Nuri is a student at Project Mercy. Aman has been a farmer all his life but he hopes that his son Nuri will not have to be a farmer.

Chris Schneider is an award-winning freelance photographer based in Denver, Colorado. He specializes in photojournalism, portraits and sports for a diverse range of editorial clients. His work has been published in the New York Times Magazine, Time, Newsweek, Photo District News, Smithsonian and the Wall Street Journal.

His photography has been recognized by Pictures of the Year International, the Atlanta Photojournalism Seminar, the National Press Photographers Association and the Casey Foundation.

He received a B.A. in journalism from San Francisco State University in 2000 with a minor in Latin American studies. During his college career, Chris interned at some of the nation's most respected newspapers including the Oregonian and the St. Petersburg Times. He also did a stint at La Nacion in Argentina. His first full-time staff positon was at the Ventura County Star where he did a series on the California juvenile justice system. In 2003, he moved to the Rocky Mountain News, where he worked for 5 years until the newspaper's closure in 2009.

During his career, Chris has worked on stories on the Columbine school shooting, the Iraq war, poverty in rural Ethiopia, AIDS, homelessness and the Presidential race in 2008. He has covered the 2006 Winter Olympics, the 2007 World Series, and the Winter X-games.